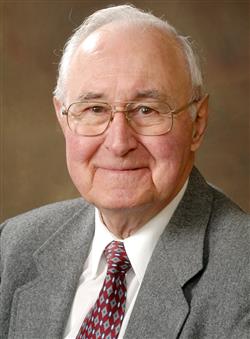 John D. Haltiwanger (1925-2008) was educator, mentor and adviser to generations of U.S. Coast Guard CEE students at the University of Illinois. Since the mid-1960s, the U.S. Coast Guard (USCG) sent its officers to the University of Illinois to earn bachelor’s and master’s degrees in civil engineering. For most of them, the faculty member who helped define their experience was Professor John D. Haltiwanger. From 1965, when the first Coast Guard students arrived in Champaign-Urbana, until 1980, Haltiwanger served as adviser to the Coast Guard students who came to Illinois. As the Coast Guard Academy expanded its civil engineering offerings in the mid-1970s, Haltiwanger helped design its curriculum and facilities.

Haltiwanger served as served as Associate Head for Undergraduate Affairs in CEE from 1967-1983, and was a member of the USCG Academy Academic Advisory Committee from 1980-1983. He was honored with many notable awards during his career, including a Public Service Commendation and the Meritorious Public Service Award from the USCG, the Bliss Medal of the Society of American Military Engineers, and election to Honorary Membership in the American Society of Civil Engineers. Throughout his career at Illinois, he was widely considered to be one of its most gifted teachers by both students and faculty.