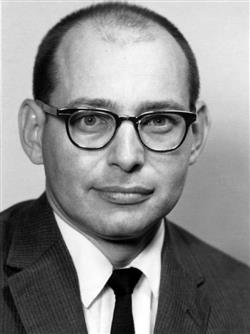 Louis Richard “Dick” Shaffer (MS 57, PhD 61) taught for nearly 40 years on the Illinois CEE faculty. He joined the department as an instructor in 1955 and was appointed chair of the Construction Engineering group in 1961. During his tenure in this post the curriculum for construction engineering and management was revamped so as to be based on more scientific principles associated with computer usage, namely operations research, systems engineering, linear program and queuing theory. In 1963 he obtained funding to establish the U.S. Army Construction Engineering Research Laboratory in civil engineering, the first attempt by the Department of Defense to partner directly with a university. The lab was dedicated in July 1969 with Shaffer as Deputy Director/Technical Director, a post he held for 25 years. Under his direction CERL grew from a starting budget of $2 million and 62 personnel to a world class research facility with a $100 million program and some 1,000 employees. He remained as the civilian senior executive for CERL until his death, remaining as an adjunct professor in the department. Additional gifts needed to fully realize this space.