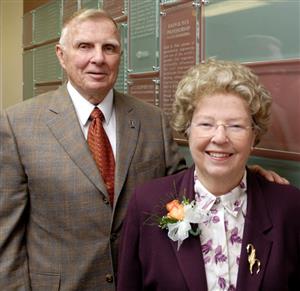 During 40 years on the faculty of the Department of Civil and Environmental Engineering at the University of Illinois at Urbana-Champaign, Professor Emeritus William J. Hall (MS 51, PhD 54) educated and inspired generations of students who became civil and environmental engineering leaders around the world. He was involved with many major engineering projects, including being part of the design team for the Trans-Alaska petroleum pipeline, many nuclear power plants, and major projects of agencies of the U.S. government, for example, Department of Defense protective structures and nuclear materials. His accomplishments included Distinguished Membership in the American Society of Civil Engineers, being named a National Honor Member of Chi Epsilon, receiving the Housner Medal of the Earthquake Engineering Research Institute, and being elected to membership in the National Academy of Engineering — one of the youngest people ever elected. He led the department as Head from 1984-1991. Hall died on June 9, 2020. Additional funding is required to fully furnish and equip this classroom.