Melvin “Mickey” Kupperman (BS 57, MS 58) and his wife, Janice, have made a gift to the CEE Modernization Fund to establish a dedicated space for CEE alumni in the planned addition to the Hydro Laboratory. The Sidney Epstein CEE Alumni Welcome Center will honor the 1943 graduate who hired Kupperman as a summer intern at A. Epstein and Sons in Chicago, touching off a 45-year career and a 60-year friendship.

“Honoring Sidney Epstein was my way of saying thank you for giving me the opportunity and ... helping me become a better person,” Kupperman said. “I am very happy that I shared my intentions with Sidney before he passed away last February at the age of 93. He was very touched.”

Kupperman is Vice Chairman and Chief Operating Officer for the real estate development, investment and management firm Silverstein Properties Inc. in New York City. He began his career at A. Epstein and Sons, the company founded in 1921 by Abraham S. Epstein (BS 11), also a CEE at Illinois alumnus.  During his 45-year career at A. Epstein, Kupperman worked side-by-side with Abraham’s two sons, Sidney and Raymond (BS 38), eventually becoming Chief Executive Officer. Throughout his career there, Kupperman had a particular focus on organizational strategy and development as well as the management and organization of mega-projects, such as the expansions of McCormick Place in Chicago and the United Airlines Terminal at O'Hare International Airport, and the redevelopment of Midway Airport.

After A. Epstein was sold to the employees through an employee stock ownership plan in late 2005, Kupperman “retired” to New York to help his longtime friend Larry Silverstein rebuild the World Trade Center.

The University of Illinois at Urbana-Champaign has honored Kupperman with the College of Engineering Alumni Award for Distinguished Service and the Department of Civil and Environmental Engineering Distinguished Alumnus Award. 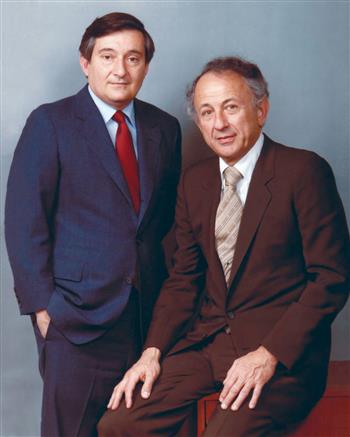 Sidney Epstein (1923-2016) is remembered in Chicago for both his engineering accomplishments and his philanthropy. A. Epstein and Sons Inc. has been credited with pioneering the “design-build” concept of construction. The firm worked on such projects as the Federal Center and the Harold Washington Public Library, both in Chicago, and the Maine Montparnasse Tower in Paris. Epstein was elected a Fellow of the American Society of Civil Engineers in 1959 and a Fellow of the Society of American Registered Architects in 1969. He was also co-founder, with Elliott Donnelley, of Chicago Youth Centers, Chicago’s largest private urban youth organization.

Thanks to the Kuppermans’ gift, generations of CEE alumni will have a “home base” in Champaign-Urbana and an appreciation for fellow CEE alum Sidney Epstein.

“I hope the welcome center would help foster a closer connection between alumni and the CEE department,” Kupperman said. “I also hope that it inspires other alumni to contribute in their own way to the future success of the department. In reality, the biggest impact may be on my sense of satisfaction by giving something back in honor of a friend and with Sidney’s family knowing that he will be long- and well-remembered.”