Professor Emeritus Jon Liebman has made a leadership gift to establish a student collaboration space named for his wife, Professor Emerita Judith Liebman. Judith was the first woman to be appointed to the tenure-track faculty in CEE.

“Judith has always had a strong interest in various forms of participatory learning: learning by doing, learning by collaboration,” Jon said. “So it is very fitting that a collaborative space in the new addition carries her name, and we both hope that a lot of enjoyable and beneficial learning will happen over the years in this space.”

Judith began her career at Illinois in 1972 as an assistant professor in CEE, later moving to the Department of Mechanical and Industrial Engineering when Jon became CEE department head. From 1986 to 1992 she served as Vice Chancellor for Research and Dean of the Graduate College. She is Professor Emerita of Operations Research in the Department of Mechanical and Industrial Engineering at Illinois. She holds a Ph.D. in Operations Research and Industrial Engineering from The Johns Hopkins University and a B.A. in Physics from the University of Colorado. She has chaired the Advisory Committee for the National Science Foundation Engineering Directorate. Other service has included membership on the Army Science Board and as president of the Council of the Operations Research Society of America. She has served on the University of Colorado Foundation Board of Directors and its Board of Trustees. Judith has authored or co-authored many research publications and received numerous awards for excellence in teaching.

The Judith Liebman Gallery will also feature a work of art donated by the Liebmans. 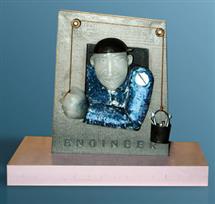 “Judith and I have been collecting contemporary art made from glass for more than 30 years,” Jon said. “We love the huge diversity of forms and representations that can be made from glass, and the incredible variety of skills and techniques that can be used to create these shapes.

“The piece that we are giving for incorporation in the space is called ‘Engineer,’ and is by British artist David Reekie. Reekie is known for his humorous figures that show aspects of the human condition, usually with an underlying serious social commentary. This work, with its almost-robotic figure with a screwed-on arm, is a reflection on under-utilization of highly-educated technical skill.”